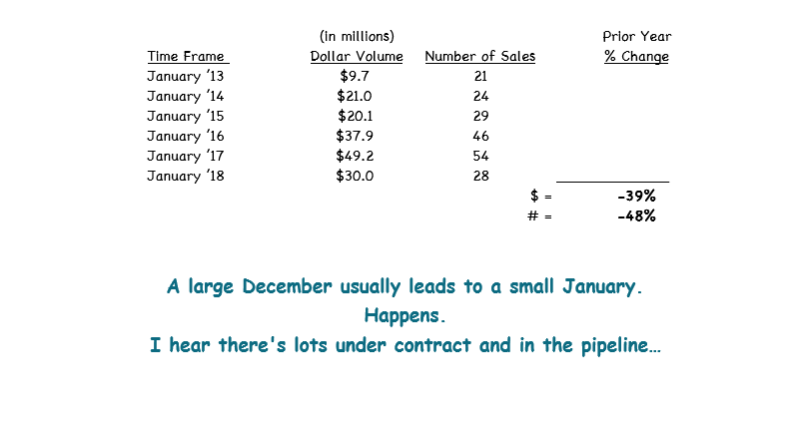 Upon first glance, some people may be alarmed to see such a drastic drop in numbers for January 2018. With that being said, because we had such a massive December, we believe it’s simply a correction and the result of the post holiday spending spree. 2017 set new highs in numbers and dollars with December having $621 million in dollar volume and 619 total units sold!

As for January’s numbers, we sold 28 units with only $30 million in dollar volume. If we look back over the last six January’s all the way to January 2013, we see that January 2018 is the third highest as far as dollar volume goes. We had the second highest December of all time in 2017 and historically we always see a drop the following January.

The only time that we saw an increase in dollar volume from December to January was from December 2016 ($46 million) to January 2017 ($49.2 million) but there were still more units sold that December (56) than there were in January (54). Chalk it up to a mild market correction or to the simple fact that most people spend a lot of money in November to December due to the holidays and use January to buckle down.

If you have any questions about these numbers or are in the market for a property, please give us a call! There is a link to our numbers below. If you’re interested in seeing how our 2017 played out, check out our 2017 end of year review.

2018 Bathroom Style Trends in Telluride & Beyond

See what happened with the Telluride Real Estate market through the second quarter of 2021 – What...

Telluride Properties is celebrating 35 years on top of Telluride Real Estate. Over the...

The New Issue of Truly Telluride is Here!